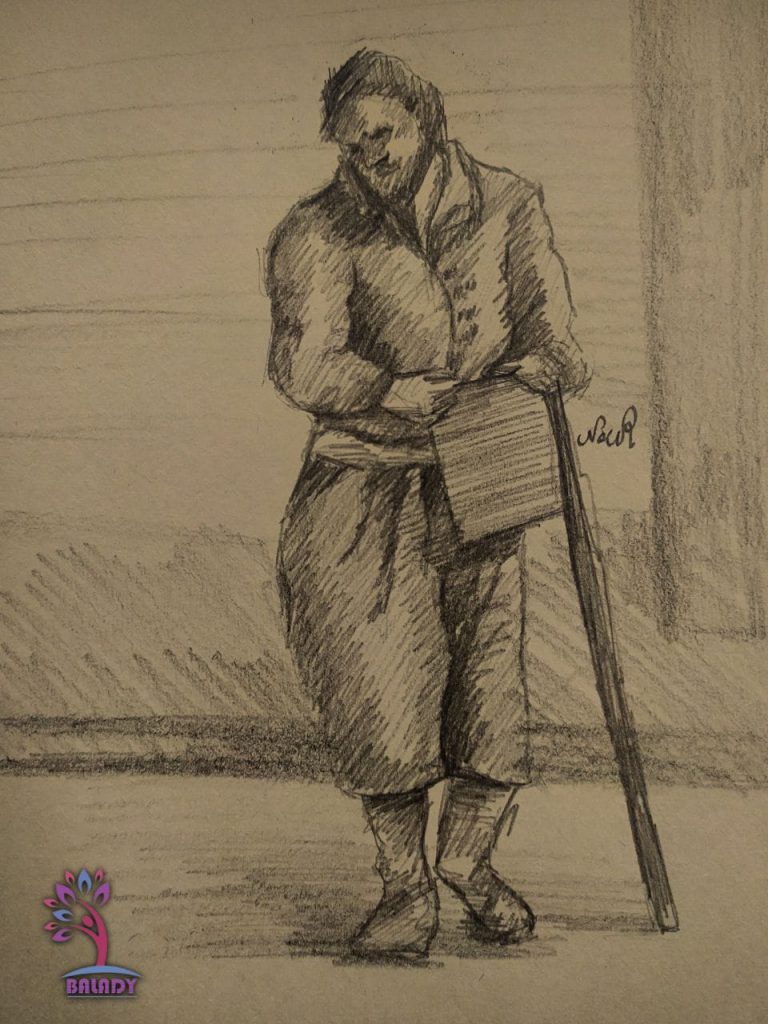 Hisham Al-Johari writes: There is something lost

“I am blind. Help me.” I was greeted by the phrase when I walked down the main street.

It sounded like a hammer that broke the silence of the street by standers’ legs run down without disturbing the asphalt by frictioning of their shoes.

I was captivated by words written in absurdity on a paper  above his white-hair head, always meeting him while sitting on the sidewalk opposite the town hall with the weight of his 70 years, groping his books and raising them to the sun with half-squented eyes that guide to their shadow.

People came across him, turning their eyes away from him as if they were looking for what they lost, rushing your question if you asked and shortened their answer if they answered.

I approached with a bottle of water to quench his lips but water drops was preceded by the steps of a fifties-year man who crossed me as he carried his bag, hand it over to the sidewalk and took uncle Abdullah’s papers , I’ll help you, say what do you want to write? Without waiting for consent, he sat next to him.

I stood behind them and before Uncle Abdullah pronounced, the man wrote, “I am blind and I want good people to help me, live alone, my children don’t care about me…

Uncle Abdullah started: the soul of the nations dies and their mettles are weakened….

The man was busy  writing without listening to what uncle Abdullah dictated and writing a word that disagreed with what he said: I was always a good man who did not anger his employers, I was always loyal to you

The last words ignited my anger and yelled at him. What are you doing, man? Continued carelessly to my shout like he doesn’t see me: I know the magnitude of your concerns and your pleasure in protecting your people

Uncle Abdullah raised his head looking for my voice: Who are you? What are you saying? What does he write?

The brown man was unimpressed by my words and stayed calm as a mass of ice roasting in front of me, raising his eye to me and then rewriting without the slightest interest in all this anger and screaming.

My hands swooped on his neck and I shook him and shouted at him, who are you? And who sent you to this blind man?

Amid his amazement he said, “ patience, brother, I’m deaf , I lost my hearing in a tragic accident and I wanted to help, I don’t hear you and I don’t hear him.”

My hand slouched off his neck and I walked like I was looking for something I had lost.