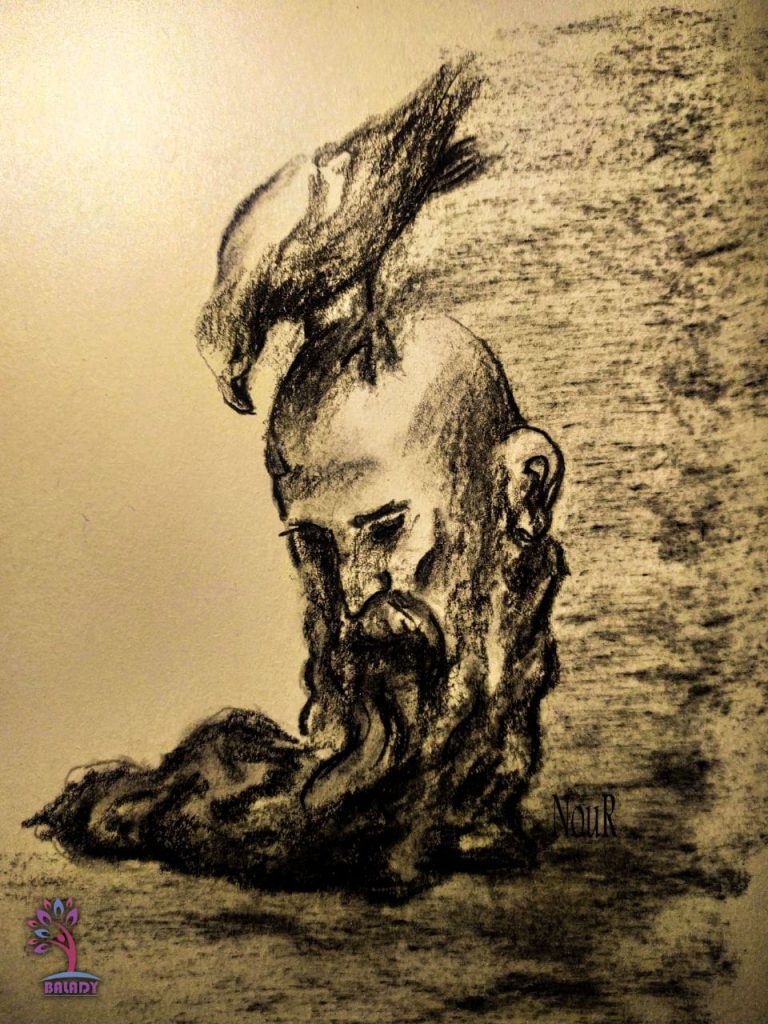 sheik, you are the protector of grace in our homes, a go between us and God, it’s for you and we are obedient.

Do you want anything before we leave? This is how a group of village men addressed their majestic sheik, and with a sign from his hand thanking their loyalty, the men left muttering their sheik’s virtues, his elder mind and his overwhelming wisdom.

The sheik sat in the chair in the balcony of his house, isolated from all races and a sign of pride and satisfaction at people’s loyalty to him was showed on his face. The table in front of him was full of all the kinds, he ate his lunch with great appetite and after he emptied all the dishes he raised his head to the heavens and said: I thank god for this status, Now, after this lunch, I feel like I am swimming in your Kingdom, my Lord, his lips are muttered from among his beard and his buggy moustache, because of fat.

But that leverage and ascendancy over people needs to be sacrificed and I will not lose my status between people for any reason.

The memory of solemn Sheikh was working as an alarm in moments of morning duration, under his mind full of his belly, joyous concerns that forgot the weight of his food and another sad one that closed his eye and spread numbness with his limbs

I can’t always say that I am ashamed to know what worries my comfort. It is these dirty crows and that raven who awaits me on the door and empties his litter on my mustache and beard as if God sent it an exam for my patience and my faith and I have lost my patience.

The solemn sheik did not complete his concerns until he heard the crows cawing before they arrived. He adjusted his sitting position and tried with his head covering to hide his face. It spinned in the sky one of them landing and a second above the same raven who always approached a short distance from the top of the sheikh and threw his litter at him and fled.

His waiting handkerchief was scanning the bird’s liquids with contempt.

How long will I endure the weight of this bird’s litter on my mustache and my chin, I’ve lived all these years wiping his shit.

What village did this bird ruin? He wonders and the weight of his limbs does not help him to resist these birds, but rather his heavy lunch slows his movement. He screams with a strangled voice calling out to the men of the village. He is no longer interested in the Lord’s exam and in a glimpse of the sight in front of him they carry their guns, calling among themselves: kill those crows. They insulted your sheik and threw their droppings at him. They got so mad and pointed their guns at the crows’ breasts. That raven didn’t care about them, downed to the sheik’s head and he hovered around him. The sheik shouted: kill him before he did it.

The guns move with the movement of his wings, a young man rushed and shooted a bullet, from which the raven avoided and deposits it into the forehead of the sheikh who fell to the ground. Voices calling out you have killed the sheik our saviour has died..

Fighting with hands and guns, bloodstains filling the place, crows spinning in the sky. Dogs bark and silence,

The sheik’s shoulder is shaken by a rough hand…..

Sheik, the protector of grace in our house Awake “You maybe ate too much, sheik” said the one with a smiling face and a round potbelly.

The sheik muttered to himself: thank God for the grace of the nightmare and kept us away from the truth.